The District of Banka is situated at the far south – east of the State of Bihar. The eastern and the southern border of the district coincides with district Godda of the state – Jharkhand. In west and north east it is bounded by Jamui and Munger disrict respectively. The old district Bhagalpur is situated in the north side of Banka. The Geographical area of the district 1s 305621 hectare i.e. 3019.3465 Sq. Km. The district head quarter of Banka is situated in Banka Town. The district has been established on 21st February, 1991. Earlier it was a Sub-Division of district Bhagalpur.

The district consists 11 blocks and two municipalities Banka and Amarpur. Under every Block there are a number of panchayats. Block details are as follows :-

The recogniton of the district is Mandar Hill (Mandar Parvat) situated at Bounsi Block at about 18 Km from District Headquarter raising its head since the epic period. The glorious fair Bounsi Mela is held every year in the month of January at the foot hill of Mandar Hill. The fair starts from 14th January ( Makar Shankranti day) every year and continues for about a month. The Mandar Hill is related with the story of Skand Puran of epic period. 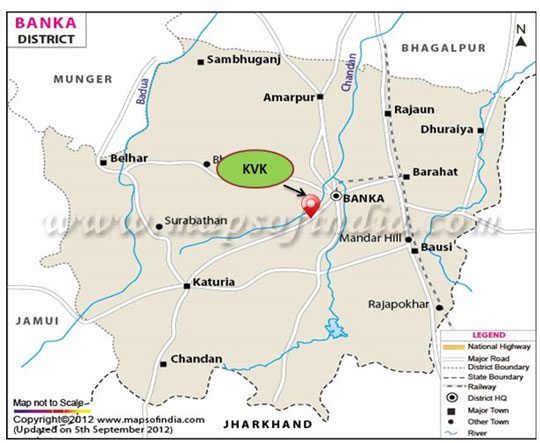